Adding a Bike Corral to Your Area

BICYCLE CORRALS FOR BUSINESSES, CITIES, AND THE ENVIRONMENT

As cities are becoming more determined to be bicycle friendly, a new idea in bike parking has come about- the Bike Corral.

What is a Bike Corral?

A bike corral is an on-street bike parking option. It provides 8-10 bike racks, usually protected by a perimeter of concrete bollards or metal railings, all contained within a regular car parking stall. They’re common in downtown areas with lots of shopping and dining options. The idea is to make bike parking easy and accessible to customers, increase foot traffic to the local businesses, increase visibility of storefronts from the street, and improve the cycling infrastructure.

Why Add a Bike Corral?

There are many reasons to add bike corrals to your area, here are a few examples of what they can offer. 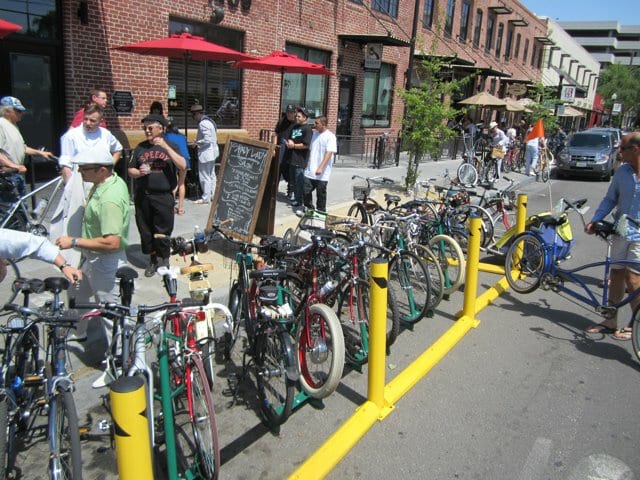 Bike corrals are fairly new, but one study by Sustrans in the UK showed that while retailers estimated that 41% of customers arrived to their location by car, only 22% had done so. The majority of their local customers had traveled either by foot or bike and after receiving this data, local business owners felt more inclined to cater towards their needs.

In Portland, OR a web-based survey was sent to businesses who were located within one-half block of a bike corral. The results of the survey indicated that many of the local businesses supported the corrals with few exceptions. Additionally, the same businesses perceived that on average, cyclists accounted for one quarter of their total customer base. More than 66% of those surveyed also reported that they had seen the rate of cyclists as customers increase as well as the demand for bike parking. This study has shown that bike corrals are commonly viewed by business owners as models of sustainable transportation, which increases foot and bike traffic and enhances the street and neighborhood identity. The overall response was that businesses viewed the investment in quality bicycle corrals as being a benefit to both cyclists and their own commercial establishments.

Who Has Implemented Bike Corrals?

Bike corrals are being tested out in many cities across the US and Europe, but the cities leading the push for on-street bike parking include: Portland, OR; Davis, CA; Seattle, WA; San Francisco, CA; Sommerville, MA; and New York, NY;

In order for a rack to be a considered a dock, it must contain (not capture) the front or rear wheel and also have a secondary point of contact with the frame for additional support. It must also allow a U-lock to easily attach around the frame, the hardened steel locking loop and a tire. 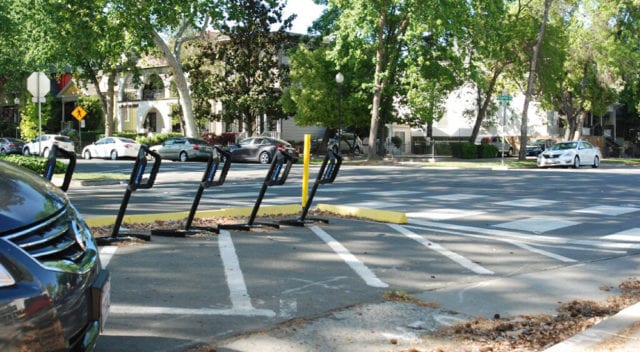 • Allows for the frame and at least one wheel to be locked
• Case hardened steel locking loops it ensures added protection from cutting
• Simple and intuitive, which ensures that bikes are kept in a controlled footprint
• The bike is fully supported by the cradle effect of the wheel trough and by the contact point of the locking loop
• Offer proper spacing between bikes to prevent handlebar and chain conflicts.

• Higher price than other style racks